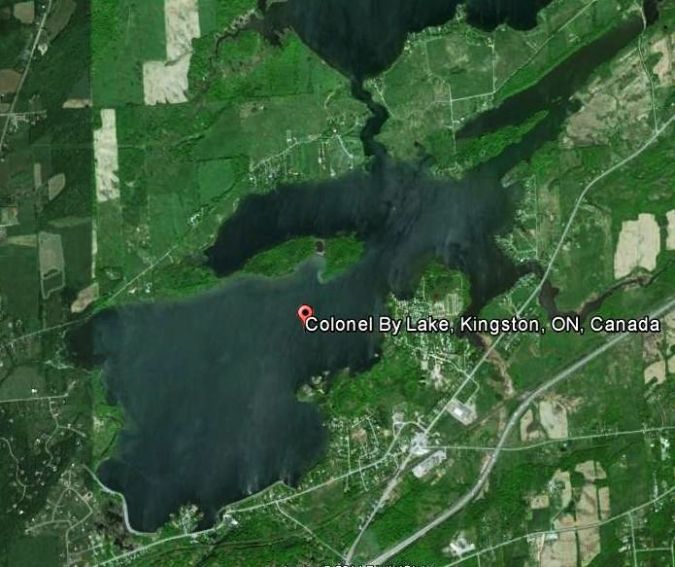 Looking from space we see that the Aragon Road runs on the north side of the lake starting midway on the left side of the photo and to the right upper part of the photograph. The bird-like area in the middle of the picture is a peninsula and belongs to the Crown. The bay between it and the  Aragon Road is called Eshter Bay. To the top right is a bay called Gibraltar Bay is it s very isolated picturesque piece of water and sanctuary. It is difficult to reach except by canoe. To the left is the canal that connects Colonel By Lake with the River Styx. These two bodies of water are the largest drowned land area in the Rideau Canal system. Clearly visible is the dam bordering Edenwood at the left lower corner. To the east of this is the rocky area with the cluster of houses just opposite Kingston Mills. From this natural border another dam stretches east and ends in a rocky area that forms a natural shore, prominent below the middle of the photo is Esther Head, a high rock outcrop. Then further to the east along Kingston Mills Road are houses that are part of Canal Drive and still further to the north east is the Rideau Acres Campground.

Note that the north side of the lake is mostly crown land and Esther Bay is bordered to the north by the Cecil and Wilma Graham Park. We will discuss in a separate chapter what the different shore structures contribute to the water quality in the lake, with the houses a potential threat and the natural shore  as important filter of run-off containing nutrients and man-made chemicals. See ” Littoral Zone” on the menu. 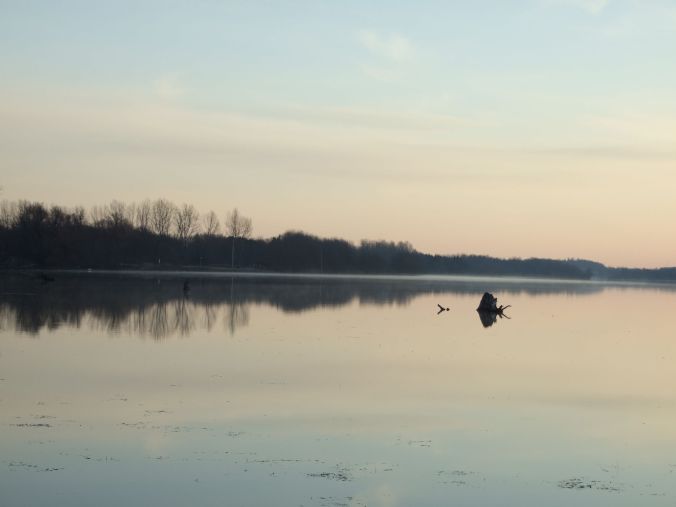 A collapsed shore tree at the exit of the canal from Colonel By Lake to the River Styx in early evening light.

Esther Bay, only accessible by canoe or small boat or on foot through the conservation area. This is the bay between the bird like peninsula and the Aragon Road seen in the aerial view at the top.

Now we travel north east leaving the marked canal towards Gibraltar Bay, a secluded area adjacent to the Isle of Man, which can be reached by car from HW 15. 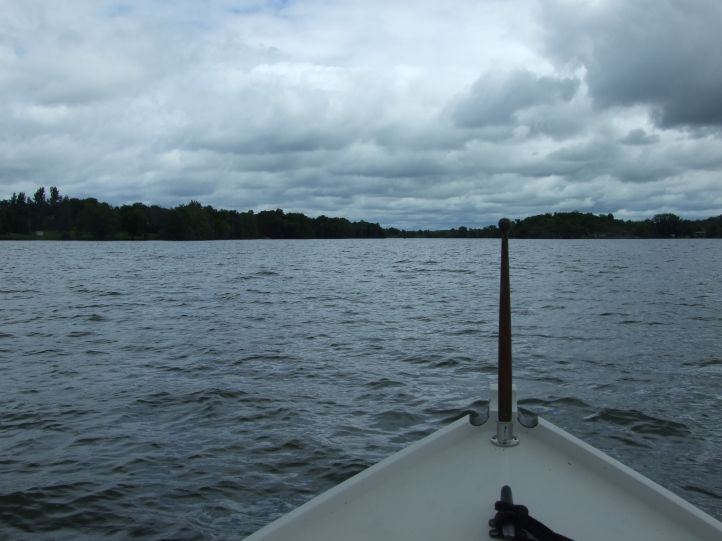 The entrance to the Gibraltar Bay is a narrow channel, suitable for canoes and small boats. The cruisers that travel the Rideau Canal would never think about going outside the marked channel.

Pity they miss so much of the wonderful bays, marches, small islands and nooks and crannies where the loons, herons and beavers live. 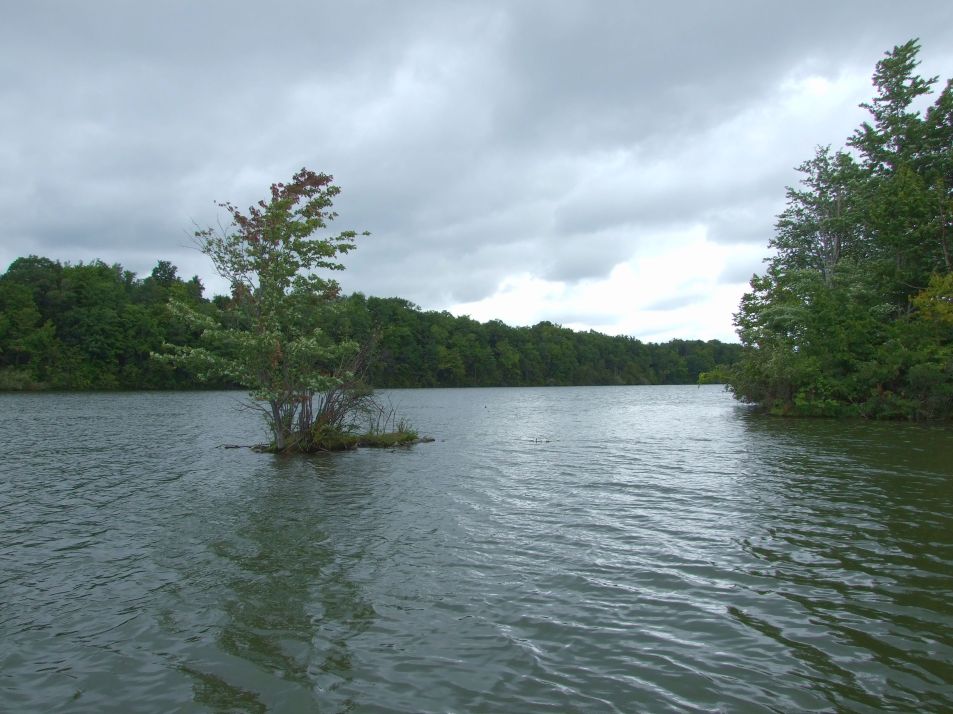 At the north east end of the bay is a large wetland. 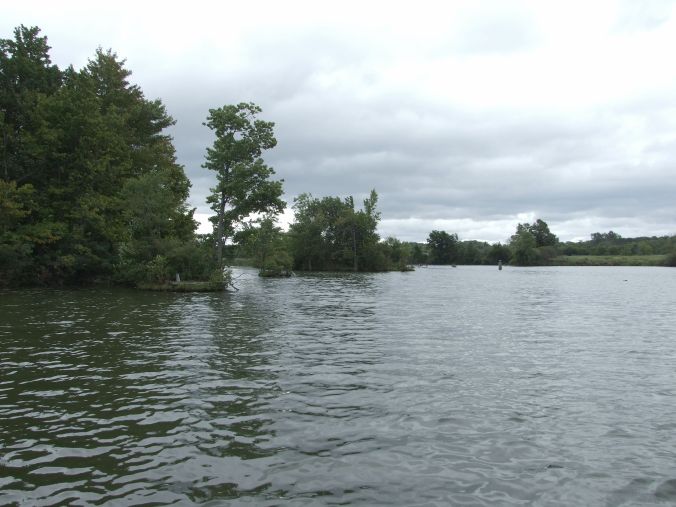 The vegetation at along the Isle of Man is dense with trees overhanging the low rock plateau that forms the island which is actually a peninsula.

A few houses and cottages on the Isle of Man are situated back from the shoreline and there is a reasonable buffer of trees to protect the lake from run-off.

Hopefully the residents do not fertilize their lawns.

The entrance to Steventown Creek that runs past HW 15 to the south is more densely built-up, the creek is not very navigable.

Going north west from Steventown Creek back to the marked canal and then heading west we approach  Kingston Mills’ upper lock, a hub of activity since 1832 when the Rideau Canal opened.

In the fall the trees on the tiny rock outcropping opposite of Kingston Mills show off a brilliance in colors.

What is under the surface of Colonel By Lake?

The most extensive flooding as a result of the building of he Rideau Cana, between Kingston and Ottawa, occurred along the Cataraqui River in the area of Colonel By Lake and the River Styx. The dam at Kingston Mills raised the water 26 feet (7.9 m) in that location, flooding the Cataraqui River up to Lower Brewers lock-station. As previously noted, the author participated in a detailed survey of Colonel By Lake with an M.Sc. student from McMaster University, Lisa Sonnenburg and her thesis advisor, Dr. Joe Boyce. This work revealed the channel of the Cataraqui River as it existed prior to flooding, first by the mill dam erected at the King’s Mills in 1784, and then by the canal dam and embankments built in 1827-1831.

The Cataraqui River was a meandering creek, winding its way across a valley floor consisting of forest and some flood marshes. When the canal was built, a swath of trees on either side of the proposed navigation channel was cut – the rest of the forest was left standing and simply drowned when the canal dams were raised. The bathymetric work has revealed the exact location of the Cataraqui River just prior to flooding and the side scan sonar work has revealed hundreds of dead-fall logs and still standing timber.

One of the reasons for this work was to help locate potential archaeological sites such as native campsites and early settler’s cabins, all now under water.

The bathymetry is from an M.Sc. thesis completed by Lisa Sonnenburg in 2006. Burrows’ map is a section from: “Plan of the Cataraqui Creek from Brewers Lower Mill To Kingston Mills Scaled and Laid Down by Order and under the Command of Lt. Coln. By Commanding Royal Engineer Rideau Canal” by John Burrows, n.d. [c.1828], National Archives of Canada, NMC 13203.

The current shoreline of Colonel By Lake is shown with a blue line. The area between the blue line and the multi-coloured area is shallow drowned land, from just one foot depth to eight foot where the coloured area starts. (HW)

where all subjects are listed. or browse the Menu at the top of each page.

One thought on “THE LAKE”