This wild turkey visited us in the late winter of 2017-18 together with her or his mate. Little did we know that they might well be the couple that populated the Cecil and Wilma Graham Memorial Park on the Arragon Road, adjacent the conservation area on Casey’s Island, a large wild piece of land protruding into Colonel By Lake and Esther Marsh Bay.

Fast forward to the summer of 2018 when mother and father were observed in the meadow that is part of the Graham park with several tiny chicks that had the greatest difficulty navigating the trail that the parents left in the tall grass.

Then, we  recently received these photos from Bob Wolfe and Jackie Duffing residents on our road and avid nature watchers. 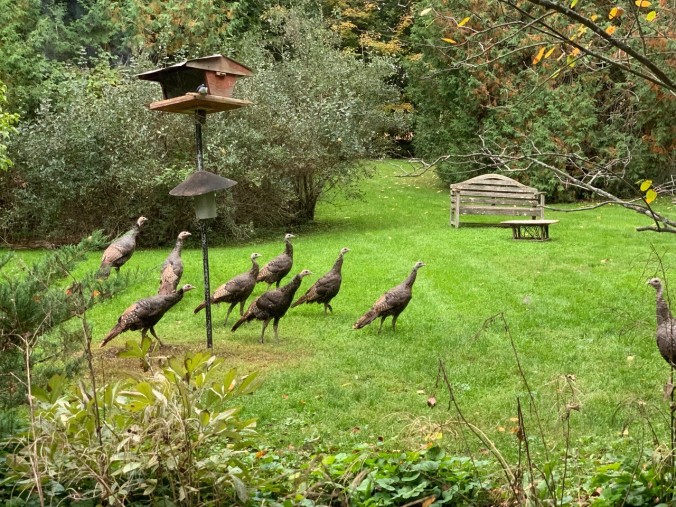 An invasion of young wild turkeys in their garden, attracted by the seeds left in the grass below the birdfeeder. How many juveniles do you count? And did you notice the chickadee on the feeder wondering what in the world in going on below?

After a good meal there needs to be time to rest. What better than a garden bench and chair?

Here is a bit of information about the introduction of the wild turkey in the Ottawa Sun: The last native wild turkey in Ontario was recorded in 1902. Generations later, Ontario wanted to provide birds for hunters. The Ministry of Natural Resources brought American turkeys into southwestern Ontario in the 1980s, and in 1997 released the first couple of dozen in Eastern Ontario, in Renfrew County. The ministry described them at the time as “like a grouse on steroids.”

But these are different birds than the native Ontario ones — a bird that is hardier in cold, happy to browse in farm fields, not afraid to live near people, and able to multiply fast. Today, there are many thousands here and in West Quebec, and more than 70,000 across Ontario.