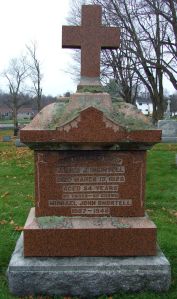 Colonel Fair died in 1954. The farm was already sold to Cliff and Marjorie Allen and several partners. Fair travelled in the Orient for business. The white house in Edenwood just north of Maple Lawn Drive, was Fair’s residence but later he had the big house built on Battersea Road, just north of the Aragon Road.[i] That is now called Fairmount Home. [ii]

The house on the top of the hill on Battersea Road and Maple Lawn Drive, south of the Aragon Road was the house Russell Lovelace lived in. Colonel Fair rented it to Mr. Lovelace for $1 per year.  Lovelace worked for Fair all his life; he was in charge of most of the farm, you might call him the “manager”.

The first limestone house on the north side of the Aragon Road, just past the boat ramp, was where Doreen Stacey lived; they had a store in town they came after Dr. and Mrs. McCuaig.

The Shortell farm just north of the Aragon Road on the Fitzpatrick side road, was where I went to live when I married Brendan Fitzpatrick.

Brendan came as a 12 year old boy from England through the Sisters of the Precious Blood, nuns from Saskatchewan and Quebec City, to work for Michael John Shortell. He worked his whole life on the farm. Brendan’s mother later contacted him from England and he would send her $200 each year at Christmas. [iii]Brendan had also a step-sister, Peggy, and they met once.

When Shortell died in 1948, he was buried in Brewers Mills Cemetry. The farm went to Brendan. Shortell’s daughter, Marion sued the estate and received some land that she later sold to the Grahams. [iv]

The farm included the peninsula across the road that divides Esther March Bay and Colonel By Lake, there was a two storey farmhouse. Our family, Mom, Dad and eight brothers moved in the early 1960-s to the Aragon Road and lived in that house.  I was 24 years old then. We came from town where we lived in a rented house, but the landlady died and the house was sold. The house south of the Aragon Road on that peninsula was for rent then and my parents signed a lease with Brendan Fitzpatrick.  Later 5 of my older brothers moved back to town, Kingston, where they had jobs. The house had four bedrooms, a living room, a large kitchen and a “bath-kitchen” which people also call a summer kitchen.[v]  My mother worked for Brendan, she cleaned his house, and that’s the way I got to know Brendan. He was much older than I; he was a good man.

I married Brendan and moved into the Shortell farm on the north side of the Aragon Road. The rest of the family left the house and moved to town.

My first born child was named Michael John, after Michael John Shortell. I also have a daughter Teresa Catherine.

We would have our cows graze on Caseys Island, during the summer.

The house across the road, where our family had lived, was then rented for $15 per month, hydro included. Several families lived in it and one night it burned down, right to the foundation. Brendan and I had gone out and when we came back it was gone. It was not insured so it was a total loss to us. Maybe the stone foundation is still there, or some remnants, but the lot is now overgrown with shrubs and trees.[vi] 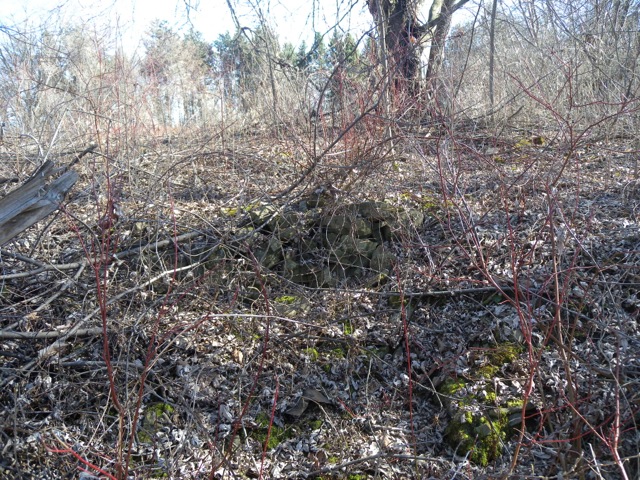 A few foundation stones, at the centre of the photo, and an open area in the forest is all that is left of the house. Photo credit: Jackie Duffin

In about 1970, 88 acres of our land were sold to the Federal Government and this is now the conservation area; it is the land that juts out as a peninsula between Esther March Bay and Colonel By Lake. It was used for a scouting jamboree and for some summer camps. Twenty one acres of this is Caseys Island.

School-age children along the Aragon Road walked to the Battersea Road to catch the school bus at the corner with our road where they met the children from the houses that were built there in the nineteen fifties.

When Brendan died, on November 4, 1970, I tried to run the farm alone because I could not afford hired help. At the time of Brendan’s death we had 28 Holstein “milkers”, several pigs and smaller farm animals. The cream was separated from the raw milk and was daily shipped to the Kingston Creamers on Johnson Street, in town. [vii]

I managed the farm for one year then sold the Holsteins to Gerald Greenlees who had an auction house on HW 15, north of Kingston Mills. The pigs had already gone by then and there were no chickens and other small farm animals.

The farm was sold in 1976 to Mr. Chippier, he owned one or more of the Tim Horton’s coffee shops in town. The beautiful red barn of the Shortell farm was converted to apartments but soon burned down. [viii]

One of the Aragon Road residents was a bit of an outlier. This was in the mid 1950-s.  One day, driving his truck, he accidentally took out a section of wire fence of one of the farmers along the Aragon Road. The farmer who witnessed this demanded the replacement of the fence forthwith. The next day the fence was repaired with a new section of wire fencing. Dolly Fitzpatrick visited Mary Keenan, another farmer’s family along Battersea Road, a few days later. Mary told her that somebody had stolen a section of their wire fence; Mary wondered who might have done that?

Times were different then, on voting day for the municipal elections, volunteers for the conservative candidate Earl McEwen would offer to drive farmers along the Aragon Road to the voting station in the Cataraqui Townhall, just opposite of the Cataraqui Cemetry on Sydenham Road; the voters were provide with all sorts of gifts like foodstuffs and booze. [ix]

[i] Fair owned this house but he never lived there according to the current owners, Dr. and Mrs. W. Reeve. However it is known that when Fair bought a farm, he would sever off a few acres, fix up the house, and sell it. He always stuccoed the outside of the farm house and whenever one sees one of the earlier houses along the Aragon Road or along Maple Lawn Road stuccoed there is red brick underneath.

[ii] The website about Fairmount Home says: “It was purchased by Frontenac County Council in 1965 for $78,000 along with 19 acres of surrounding land.”

[iv] See Wilma Grahams story, you can find it in the index of the blog at https://aragonroadhistory.wordpress.com/.

[v] “Bath-kitchen” is a term Dolly used, it is the same as summer-kitchen which was an attached or semi-attached kitchen for preparing meals for the farm hands and to do the laundry. No doubt it would also have been the place where the children in the family would get a good scrubbing once a week. Bath-kitchen therefore seems a good descriptive name.

[vi] Our neighbours, Jakie Duffin and Bob Wolfe often hike in the conservation area that was once part of the Shortell Farm; they report ruins of a house at the intersection of a path leading east from the double wire fence gate just opposite Fitzpatrick Road and a footpath from the entrance at the Cecil and Wilma Graham Park memorial going south.

[vii] The location is where now the Metro store is. See also the story told by Marjorie Allen on this blog.

[viii] Chippier built the large estate house on the south side of the Aragon Road, just opposite of the Shortell farm, at the foot of Fitzpatrick Road, and lived there in the early 1980s. Shortly after 1982 he sold the house and the Shortell farm lands to Mr. and Mrs. Jack Colden, who owned Canadian Tire on Princess Street. Chippier moved back into the Shortell farmhouse which was partly rented. Chippier did not well in his business and in the late 1980-s moved to Kingston, “to town”. The old farmhouse is unrecognisable after the many additions and rebuilding that was done over the years.

[ix] J. Earl McEwen was first elected to Kingston Township Council in 1959; Deputy Reeve in 1960 and served as Reeve from 1961-1965 and 1967-1975. He was elected and served as a member in the Ontario Legislature from 1975-1985. He was also a successful business man and owned and operated several food stores including the Reddendale Food Market, and Ken & Rays in Collins Bay. 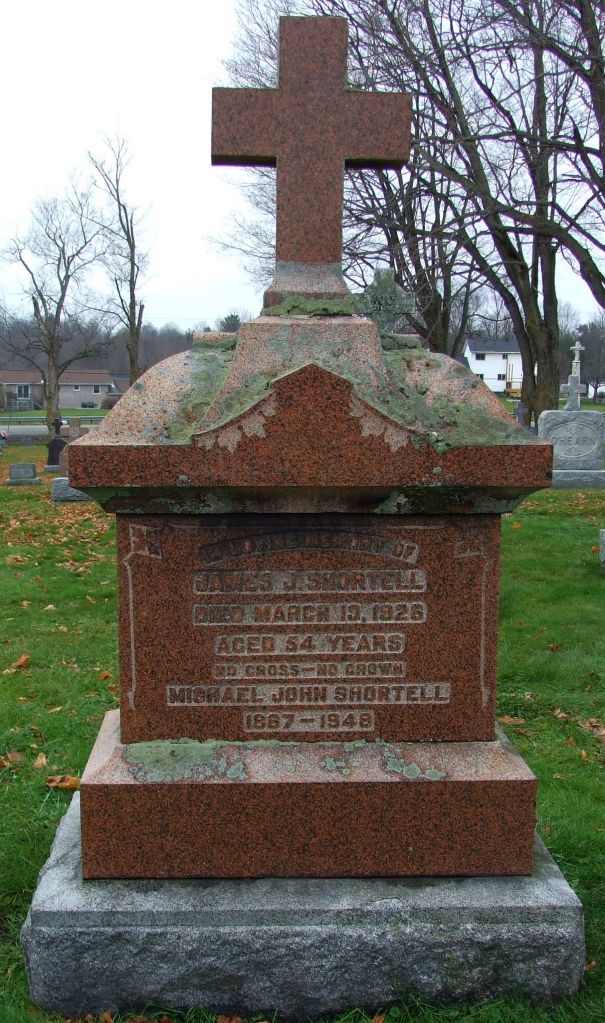 The Shortell family has many of its large family buried at Brewers Mills. The cemetery is adjacent to the Catholic Church just off HW 15 a short distance north of Sunbury Road. the family grave marker reads at the bottom entry; Michael John Shortell 1867-1948. Each side of the marker has many names on it and there are several of such markers for the Shortell family, each with several names, going as far back as  1793.

The interview was conducted between July and November 2014.

Dolly-Catherine was married to Brendan Fitzpatrick and after his death remarried. Dolly’s maiden name is Poffley.